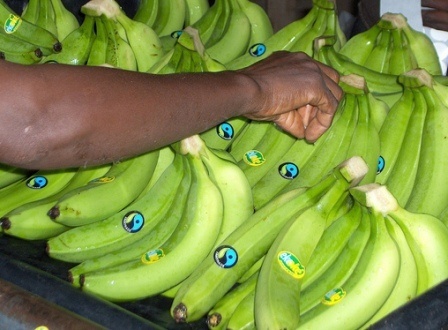 According to the Ministry of Trade and Industry, Ghana has increased its banana exports from 4,000 metric tonnes to 65,000 tonnes per annum in the last six years.

The World Bank’s 2001 estimates indicated that Ghana needs to produce close to 60,000 tonnes of bananas a year to be able to sustain the banana industry and to really make an impact on the international market considering the fact that there is tough competition from Latin America. Ghana exports about 90 per cent of the bananas to the European market, the same market on which Latin America and other producing countries trade their bananas.

Economy Times a privately-owned weekly newspaper, quoted Ghana’s Minister of Trade and Industry, Hannah Tetteh, on the reason for the phenomenal increase in the export figure of bananas to, “the fact that packaging materials, farm inputs, are brought into the country duty – free under the free zones board enterprises.”

But this is not all there is to raking in enough foreign exchange for the country. Ghana could initiate serious moves towards adding value to its fresh bananas as it cannot continue to be stagnant as far as new innovations within the international trade system are concerned.

According to Agritrade, the European Union (EU) banana regime covers fresh and dried bananas (excluding plantains), frozen, provisionally preserved and prepared bananas, banana juice, banana flour, meal and powder. Agritrade is a commercial lending company and provides technical assistance in drawing up business plans and proposals. While such an array of value addition is offered to producers by the EU, Ghana is only concentrating on exporting fresh bananas.

Agritrade reported recently that, “Between June and August 2011, EU banana prices collapsed, with bananas being sold for as little as one to three dollars (freight on board) in Ecuador. A Fyffes representative attributed the price collapse to overproduction in Ecuador and the EU’s new import licensing system, which had seen more importers enter the EU banana trade. Some importers maintain that Ecuadorian bananas were being sold at below cost price.

“The political turmoil in the Middle East and North Africa also appears to have been an important factor. This not only interrupted payments for bananas already delivered, but more significantly led to the loss of a market for one million boxes of Ecuadorian bananas per week. These bananas were then directed to an EU market where consumption was already depressed. This relative oversupply appears to have contributed to the EU price collapse, despite earlier Ecuadorian efforts to manage supplies to the market. Further supply management measures are now under consideration, with exports being reduced by as much as 30 to 40 per cent to aid price recovery.”

Even though the banana industry in Ghana is still young, the government can still collaborate with the private sector and research institutions to come up with a blueprint for an appreciable percentage of value addition to the country’s bananas. It is important to note that by adding value to a produce also means proper packaging to meet international standards. And so packaging banana juice, banana flour etc. by manufacturers must be done with the view to pleasing the eyes of consumers while also maintaining the quality of the contents as well.

Maintaining the above mentioned requirements for value addition could be a watershed in Ghana’s seemingly slow-paced journey towards capturing a major share of the EU market as far as exports of both fresh bananas and their added values are concerned. Steps towards achieving this objective could be taken immediately.