The recently elected new Government in Ghana is steaming ahead with free thinking and free market policies for agriculture with the ultimate aim of food self sufficiency.

That was the message loud and clear from the high-powered delegation led by the Deputy Minister of Agriculture, Hon. Nii Amasah Namoale (MP for La Dade Kotopon Constituency in Greater Accra) and his parliamentary colleagues, who briefed African Farming on the Ghana International Stand at the United Kingdom’s Royal Agricultural Show at Stoneleigh Park Warwickshire in July 2009.

The stand featured fresh produce, commodities and manufactured products representing a wide area of Ghana, as did the other Members of Parliament – Hon.

Sampsons Ahi MP for Juaboso Constituency in Western Region; Hon. Kojo Adu Adenta MP for Adenta Constituency in Greater Accra and Hon Dr Owusu Afritie Akoto MP for Kwadaso in Ashanti region. By the 1970’s many African nations had been independent for around 10 years and classical development aid programmes were clearly not working as they should. More free-thinking and far-sighted people in Africa called upon Developed Countries to assist the Developing world by ‘helping these nations to help themselves’. Almost four decades later this philosophy is the resurrected rallying call of the newly elected government in Ghana. 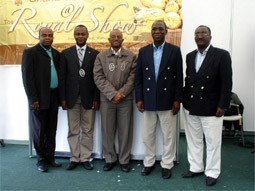 They are not looking for ‘hand-outs’ but real partnership through economic investment, skills transfer, mechanisation of agriculture and modern technology for agro-processing and manufacturing industries. Looking for investors and partners “We are looking for partners to share in our agricultural development” said the Deputy Minister of Agriculture. “Ghana requires expertise and experience and especially in mechanisation and large scale agriculture and for this we are in urgent need of machinery, plant and equipment,” he said. Investors will receive a good economic return and will be free to take what they earn out of Ghana, he said. “We have the manpower because some 60 per cent of the population are already involved in agriculture one way and another, and we determined to guide and encourage our youth into agriculture and agribusiness for the good of the country.” It became immediately apparent why Ghana was at The Royal Show with such a big stand and such a high-profile delegation representing the government and parliament in Ghana. “We are here to meet with investors and potential partners who can share in Ghana’s future success at a time of unrivalled opportunity for foreign investors,” said the Members of Parliament.

“This means maintaining key industries like cocoa and bulk fruit exports, developing new ones like fish feed manufacture for our fish farms and resurrecting once thriving industries that have fallen on hard times”. This happened for a variety of reasons and often through misguided attempts by Developed country economies to provide cheap food for African markets thereby destroying their home-grown industries. Resurrect home production The classic case in point is poultry and not only in Ghana, because other West African nations like Cameroon and Senegal has suffered the same problem.

When I started writing for African Farming around twenty five years ago the magazine regularly carried innovative and optimistic articles written by scientists and producers from the fast growing and developing poultry industries across West Africa and especially in Ghana. Now there is a dearth and you only have to read what has happened and is still happening to African country poultry markets to understand why this has occurred. African countries are pressured by The World Bank and The International Monetary Fund to scrap their own tariffs and subsidies as part of free trade rules, which means opening up their markets to developed country produce. This opening has been ruthlessly exploited by the European Union (EU) through its CAP (Common Agricultural Policy) the EU (European Union), which lavishes subsidies on its wealthiest farmers and biggest landowners. They are then able to dump cheap chicken on Africa at prices which African producers just cannot compete with, and often below cost.

This essentially and effectively means subsidies given to wealthy farmers in Europe are at the expense of millions of some of the poorest farmers in Africa. European preference for chicken breasts and legs means that unwanted thighs and wings are often frozen and exported to Africa where they are sold for rock-bottom prices. Chicken farmers in Ghana used to supply most of their home demand, but by 2006 their market share had shrunk alarmingly because subsidized imports were 50 per cent cheaper.

Perhaps one of the worst aspects is allegations that a lot of such frozen chicken exported to Africa is of highly questionable quality, with suggestions that some would have ended up as pet food because it would not meet the grade in the markets where it was produced. To be fair the EU is not the only culprit because much frozen poultry arriving in West Africa comes from North America and more recently from China and other Asian producers with a surplus. Be that as it may the Government of Ghana wants to change all this, re-invest in the poultry industry and work quickly towards self sufficiency. Protect mainstream industries Cocoa remains the longest established mainstream industry in Ghana with cured (fermented and dried) cocoa beans acknowledged throughout the world as ‘The Gold Standard’ in cocoa.

“In future we intend to make cocoa protection and pesticide spraying, where applicable, mandatory throughout Ghana so we can get right on top of the triple problems of black pod disease, mirid (capsid) insect pests and ‘swollen shoot’ a virus disease which is transmitted by mealy bug insects, said the Members of Parliament. Moreover fertilizer application to maximise yields is firmly in focus. Current emphasis is to find new uses for cocoa and expand existing ones, especially for the huge amount of cocoa waste and by-product including cocoa husk and ‘sweatings’ from fermentation of the mucilage that surrounds the fresh beans.

Established cocoa by-products include animal feed, potash used in the soap industry and potash fertilizer all from cocoa husk. And from cocoa pulp juice (sweatings) is pectin for use in food (jam), confectionery and pharmaceuticals, and cocoa wine, cocoa gin and brandy and vinegar. Products (other than chocolate) made directly from the beans include moisturising cocoa butter soap, cocoa butter body pomade and pastries from cocoa powder. New fresh fruits are constantly under consideration and development while pineapple, mango and papaya, which are already well established in Ghana especially for export, is consolidated and subject to planned increases. Private not government This new government is adamant about not getting too closely involved in day-to-day hands on agricultural production in the Ghana, claiming previous experience shows that the private sector is much better equipped and placed to carry this out.

The Deputy Agriculture Minister used the example of Ghana’s fish farming industry producing tilapia and catfish and which currently suffers from having a non-functioning government-run fish feed manufacturing capacity. This means Ghana currently has to import finished fish feed at great and unnecessary expense from Israel and other countries even though it has the raw materials to manufacture its own. “One of our first priorities is to find partners to finance and develop fish feed mill technology in Ghana” said Dr Owusu Afritie Akoto, who is closely involved with agro-processing and food processing in Ghana through his own company called ‘Tema Flourmills’ in Greater Accra region. Oil palm and its processing into palm oil and other commodities is a clear example where government plans to expand are firmly focussed on the private sector.

Previous government plans were for large scale direct cooperation between the Government of Ghana and South East Asian companies for technology transfer in production of oil palm and processing of harvested palm nuts. But future moves will almost certainly involve Ghana’s private sector because this new administration believes ‘government’ should not get too closely involved and entangled in this kind of development project. Wide range on show Anyone who doubts the rich spread of manufactured agricultural and food products on offer in Ghana only needed to look at the depth and range of products from private companies on the stand.

These included washed pepper and pepper paste (cayenne chilli and scotch bonnet) from West West and Elsa Foods cassava flour, Tuo Zoafi (fermented cassava flour) and Hausa Koko (a traditional African dish). There was Life Gold natural cocoa powder, Praise palm cream, Hayes mango puree and Kpasung 100 per cent Shea butter. Message from Ghana The Royal Agricultural Show is organised and supported by The International Agric-Technology Centre Limited (IATC), at Stoneleigh Park near Coventry in Midlands of the UK, and this year was attended 115,000 people daily and who came to see the 500+ exhibitors over eighty of which were from outside the UK.

Stephen Fai representative the Chairman of Trustees of the event said Ghana’s stand was impressive and an entirely appropriate way of showing international buyers that Ghana could meet their aspirations through export of its goods and services. He said The Royal Show was a good opportunity for the country to develop its international trade activity. “We are extremely happy for Ghana to participate in this fair over the years with us. We know that good business was done at the Show and that the very high standards of products will be an attraction to interested investors”. This year’s event was the last in the series of a kind of agricultural show which have run for a century and a half. Ghana has taken part in all the shows since its independence.

In his official address Deputy Minister of Agriculture, Nii Amasah Namoale declared Ghana government’s position on agriculture and investment and said “we have provided enabling environment for investment in all sectors of our economy including agriculture.” This according to him included stable economy and political situation that the nation has enjoyed over the years. He therefore urged the international community to explore avenues of investment and assured them of the government’s support and assistance.

The Acting Ghana’s High Commissioner to the United Kingdom, Mr. Zed Grant-Essilfie said the fair has given Ghana the opportunity to portray her agricultural potentials to the rest of the world. He said the event has been used as a centre of knowledge transfer, technical innovation and the management of countryside change to the long-term benefit of agriculture and the rural economy of Ghana.

Trade and Investment Officers from the Ghana High Commission in London offered first- hand knowledge and experience of the Ghanaian agricultural and markets insight to the UK and the world companies and individuals present. The message from Ghana was loud and clear:

• We are aiming for self sufficiency to feed our population

• We have the climate, the raw materials and the manpower but we cannot achieve all our aims and aspirations alone.

• We need investment, skills, expertise and experience, especially with plant and machinery for the mechanisation of our agriculture and the modernisation of agro-processing and food manufacturing.

• We are looking for investors to become real and equal partners in these new exciting developments and unrivalled opportunities in Ghana and who will be able to keep and take away their share of the rewards.