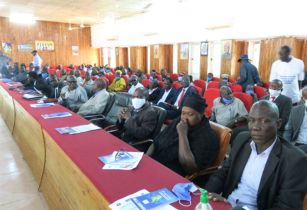 A three-day interstate conference brought together around 100 participants drawn across two states in South Sudan - Warrap and Western Bahr el Ghazal - to dialogue on a key issue: Preventing conflicts between herders and farmers during the upcoming cattle migration season

The main outcome from the gathering was the need to deploy an integrated joint police force and operationalise a mobile court that can step in if disputes arise.

“We have spoken a lot over the years about all farmers and pastoralists respecting the rule of law when the annual cattle migration comes up, so it is good that this year we are being proactive and sitting together before the event happens to put in place much-needed safeguards for all communities,” said Sam Muhumure, head of the United Nations Mission in South Sudan’s (UNMISS) field office in Wau.

“Many of these recommendations aren’t new, but we all must join together to implement them fully,” he added, while calling for participants to sensitize their communities about the risks associated with these bovine voyages and mitigating measures."

Every year between January and April, cattle herders in the Tonj and Gogrial region of Warrap move their animals to greener pastures near Wau. This annual migration of hungry cattle and their often-armed owners creates tensions with farmers in the area, as cows tend to eat crops. They also affect available water sources negatively.

Disagreements caused by such movements sometimes escalate into violent clashes and the loss of lives, a phenomenon that in November 2016 made herders and farmers sign the Marial Bai Agreement, so baptised after a county with the same name, stipulates rules on how to resolve migration related struggles, procedures for seeking permission to move cattle and what compensation should be paid for crops eaten and livestock killed.