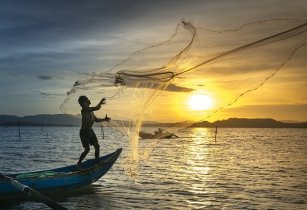 With about 60 per cent of the nation's annual protein is derived from fishing, and with fishing employing about 20 per cent of the nation's work force, the President explained that  the decision is taken to continually improve the infrastructure and conditions of the fishing industry to help improve our catch, cut down post-harvest losses and reduce fish imports in the medium to long term.

The Elmina Fishing Port Rehabilitation Project was originally set to be financed by the CDB Loan from China, however, the government has secured separate funding from Belgium for the construction of a new fishing Port.

During his tour of the western region last year, at Axim and Moree, the president symbolically cut the sod for the construction of 11 modern landing sites along the coast. The other nine beneficiary towns include Moree, Mumford, Winneba, Senya Beraku, Gomoa Fete and Elmina in the Central Region, Teshie and James Town in the Greater Accra Region, and Keta in the Volta Region.

The work is progressing steadily at all the locations, with the sites at Axim, Dixcove, Senya Beraku and Gomoa Fetteh scheduled to be completed by the end of the year.