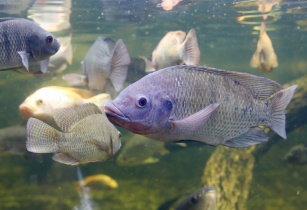 A new genomics marker tool has been able to accurately identify tilapia species and tell apart their hybrids, providing a novel resource to help develop aquaculture and empower conservation in Tanzania, Africa

Tropical inland aquaculture production has increased rapidly in the recent decades to 47m tonnes in 2018. Tilapia, a group of cichlid fish dominated by the genus Oreochromis and native to Africa and the Middle East, have been a key part of this expansion – accounting for 5.5m tonnes of the global total. Continued expansion of inland aquaculture is particularly important in Africa, where climate change and population growth are putting vulnerable food production systems under added strain.

As a result of inland waters' temperature gradually rising due to climate change, African fisheries suffer from associated physical and chemical changes to the aquatic environment. This coupled with the continuous population growth that is estimated to reach 9 billion inhabitants in sub Saharan Africa and Asia by 2100, causes further concern for food security.

Tilapia is endemic to Africa, and East Africa including Tanzania is a hotspot of natural diversity for tilapia species. At least eight fully-endemic Oreochromis species are found in Tanzania and an additional 12 species that are endemic to catchments shared with neighbouring countries. Several of these species are adapted to unique environmental conditions, such as elevated temperatures, salinity, and pH and could be of interest for future aquaculture developments.

Lead author Dr Adam Ciezarek, Postdoctoral Scientist in the Haerty Group at the Earlham Institute said, "One of the major difficulties in tilapia aquaculture lies with the discrimination of species. This currently relies on morphological traits, which are particularly a problem to identify in females and juveniles. This in turn can lead to accidental stock contamination. Furthermore, non-native farmed tilapia populations (Nile tilapia, O. niloticus) are known to be widely distributed across Africa and to hybridise with native Oreochromis species. Tilapia is a hugely important group of fish for aquaculture. Farmed strains have been introduced to many water bodies as non-native species, which creates a problem in areas where native tilapia species are prone to hybridising. Hybrid tilapias grow slower, which threatens the survival of natural populations.”

"Such safeguarding of the wild relatives of farmed species would also protect unique genetic resources that could be used to enhance traits in cultured Oreochromis cichlid strains."

This study was funded by the UKRI Biotechnology and Biological Sciences Council, the Royal Society and the Leverhulme Trust.