TİKA sets up agricultural and aquacultural production facility in Niger 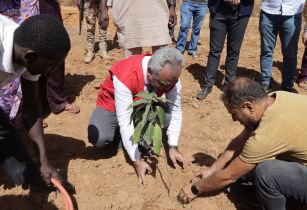 The opening ceremony of the project was attended by TİKA’s Niamey coordinator İrfan Pamuk, president of ICYF Taha Ayhan, director-general of the High Authority for Waqf (WAQF) Khadidjah Diallo and deputy mayor of Torodi Souleymane Issa.

Souleymane Issa expressed his gratitude to TİKA and hoped that the agency’s activities continue in Torodi. Taha Ayhan described the role and scope of the Islamic Cooperation Youth Forum and noted that TİKA was one of their major partners providing development support and that their cooperation would continue. İrfan Pamuk said the project was another product of the cooperation between Niger and Turkey and that the facility would contribute to the production capacity of Niger.

The project aims to provide employment opportunities to 200 young people and women, and to prevent young people from being drawn into terrorism by helping them participate in production activities, since terrorist incidents have increased in the region recently.