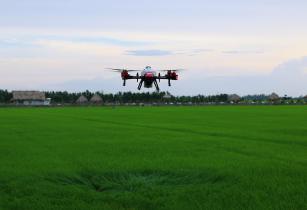 XAG has geared up to launch its V40 and P40 Agricultural Drone globally, bringing digital agriculture into more rural areas with aging population and weak infrastructure

The XAG V40 and P40 are fully autonomous drones that can conduct mapping, spraying, and broadcast on farm. They are aimed at supporting farmers' transition to climate-smart practices, driving greater growth with lower carbon footprints and less agrochemical.

The V40, as the flagship model of XAG V Series Agricultural Drone, is the first tilting twin-rotor unmanned flying platform of its kind in agriculture to find the right balance between precision, performance, and efficiency. With a 16-litre liquid tank and a 25-litre granular container, the XAG V40 elevates the maximum flow rate of its spray system at 10L/minute and can spread up to 40kg seeds or fertilisers in one minute.

Owing to its twin-rotor structure, the V40 has a more concentrated wind field that contributes to an effective spray width of up to 10 metres. With multiple aerodynamic optimisations, its spray penetration is over twice that of traditional multi-rotor drone, making drops penetrate more precisely into dense crop canopies. This provides stronger protection against weeds, diseases, and insect pests to close the yield gap.

Both V40 and P40 Agricultural Drone are built with highly modular design that unlocks their three-in-one functions. They can go with three different task systems - XAG RevoSpray, RevoCast and RealTerra system, which allow farmers to use the same platforms for collecting digital field maps, sowing seeds, and controlling crop diseases. Using one drone for multiple applications can significantly reduce the barriers of farmers to embrace digital agriculture.

Traditionally, pesticides are used to be sprayed aimlessly over a large area by knapsack sprayers, tractors, or aeroplanes, which often lead to chemical overuse and waste of water. XAG RealTerra system enables an agricultural drone to have rapid mapping capability. It can shoot, map, and analyse farmland images autonomously. After collecting the 3D digital field maps on crop growth, the V40 and P40 can be rapidly switched into the RevoSpray or RevoCast system to carry out variable-rate operations. This means that sprays can be precisely targeted on where it is needed to cut down the use of pesticides and fertilisers.